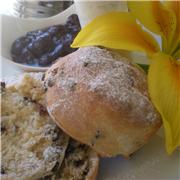 Scones. What are they and where do they come from?

Before getting into the what and wherefores etc, lets think about the actual pronounciation. Best explained maybe by the following poem (author unknown to me)

"I asked the maid in a dulcet tone, to order me a buttered scone

The silly girl has been and gone, and ordered a buttered scone"

An old Scottish relative once took me to task (when I was but a lowly trainee chef) for the mis-pronounciation. She duelly informed me, that they were Scottish in origin and correct pronounciation was in fact "skawn". She told me her mother would often make the dough up and bake it similar to the Irish soda bread, as in one round piece and scored into triangles, this she called a bannock, with the smaller ones once broken or cut off as "skawns"

I have always held the belief that like many foods, many countries could lay claim to the humble scone. Given the fact, they are nothing more than a type of simple bread or cake, after all isn't Irish soda bread a type of scone? As Shakespeare wrote "whats in a name? That which we call a rose. By any other name would smell as sweet"

Now as to the recipe. The modern version however, is quite modern. Baring in mind that baking powder was unknown and not popularised until the mid 19th century. So the modern recipe is less than 150 years old, while "skawns" pre-date this by a few centuries. The Oxford English Dictionary states the word dates back to the mid 16th Century

Given these ideals, what is the correct recipe? What recipe produces the perfect scone? What is a perfect scone for that matter? Should the texture be light and flaky or light and crumbly? Should it be light in texture at all?

What about the recipe? If we accept it would have been originally produced by for want of a better word "peasants", should the recipe contain butter or would another rendered fat have been more commonly used, or would it have just come from the yolk of the egg? Would these peasants have 'wasted' eggs by putting them into bread? Was fat used at all?

Recipes for items like scones, develop and change with time, as we understand the principles of culinary science and try to better what we had before.

My own train of thought is that a perfect scone, is what you prefer or what you are used to, where you were brought up and what your parents or grandparents brought you up on. Anything else is a "man made" stipulation, as opposed to say a genoese sponge, that has a more difinitive history and description of how the texture should be.

"whats in a recipe? That which we call a s-cone, sc-on or skawn. By any other recipe would taste as sweet"