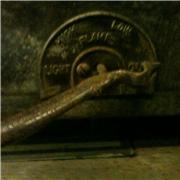 The most common questions asked of me at cooking demonstrations etc are in regards to oven temperatures; "what would that be for a gas oven", "should I adjust for a fan assisted oven" etc

Lets me start by stating, even two ovens of the same make and model, will differ slightly. I had ten new commercial, expensive stoves in my kitchen about ten years ago. My trainees soon got to realise that no two are alike and became quick to learn to adjust timings or temperature control is using differerent ovens.

All ovens will have what we call hot and cold spots, good chefs know their ovens intimately and know where these hot and cold spots are and make the most of them. They also know their ovens so well, if a recipe calls for 180C they will add or knock off a few degrees as required or will adjust the cooking time accordingly. For example, some ovens for example will cook scones perfectly in 12 minutes at 200C, by knowing the oven a trained chef or good home cook will either know to adjust thier oven heat to 190 or 210, or keep it at 200C but increase or decrease the time

Why? Oven temperatures are a fickle thing. Firstly lets think about what that dial really means and let me pose question. When you pre-heat or heat an oven to 180C, what part of the oven is 180C? Answer - only the area that contains the thermostat. The thermostat might be at the top, left, right, back or at the bottom, the rest of the oven will be approx. 10 degrees hotter or colder. This is why if you insist on total accuracy, having an oven thermometer to pop in is recommended, but rarely neccessary unless your oven seems widely out of kilter. For example, burning a fruit cake after just 10 minutes when set at 140C, or soggy puff pastry when pre-heated to 220C.

ovens and their history

cooking of foods originated by placing foods over an open flame (possibly on the end of a stick) an early form of roasting or bbq. Then we discovered pots and foods were stewed in liquids. Eventually ovens were invented, which for a millenia were nothing more that an enclosed fire, where the foods were separated by a clay or brick layer.

These early ovens had absoloutly no heat control other than how much fuel was added or how they were stoked. Meaning they were generally very hot, and therefore its cooking time was more than likely controlled by time only and the food was cut or produced smaller to cook quicker without burning. A perfect example of this is the pizza and the pizza oven. A good Italian pizza is thin crusted and the toppings cut small, so it can be placed in a wood fire burning oven and be cooked within two minutes (it has a core temperature of between 400 to 500 C, far hotter than any domestic ovens)

These early ovens were clay or brick, not until the 18th century did cast iron oven come into production, wood burning but with no thermostat control. Then in the early 19th century ovens were invented to burn coal, but still no heat control. James Sharp created the first successful gas oven in the late 1820's and yet still no major heat control (apart from like the "dial" in the photo to the left, which I discovered on an oven in a Devon junk yard, a week or so after writing this article)  It took about another century until electric ovens to start to compete with these gas ovens and the thermostat to come into being.

It is easy to see then why certain foods and dishes we take for granted today, only came into being within recent history. Chefs could not create delicate dishes or foods, that required a gentle heat (e.g. meringues and sponge cakes) if they didn't have a way of controlling the heat.

Thankfully these days we have it far easier. Now, what about oven temperatures and why is so difficult to get it right?

know your oven and its temperatures

Know your oven and realise no two are alike. Knowing your oven's hot and cold spots will not only make your cooking a lot easier but also produce far better results. If you have a modern fan assisted oven, lower the recipes recommended temperature by up to 10C.

Then Celcius became a more popular measure of heat. With most oven dials now in degrees C or with computer chip dialling that allows you to set a desired temperature.

Whichever oven you use, whichever dial you have its important to know what temperature a recipe requires, but remember the temperature stated is that of the oven of the recipe creator, it is a guideline, adjust to suit your own oven "know your oven"

Below is a table of conversions; gas mark, farenheit and celcius. But remember, "know your oven", this and any other conversion table you see is a guidline only

why do I always start my baking & roasting recipes with "pre-heat oven to ........ "?  The answer is simple, most foods placed into the oven require an immediate heat for a variety of reasons, e.g.

cooking is not just recipes

Even if you allow for your own ovens 'personalities', remember no two foods are alike. A batch of scones cooked perfectly at 200C for 12 minutes one day, may need 10 or 14 minutes the next day. Simply because they may not have been cut as thick as before or the flour might not have been measured so accurately.

I always consider the best piece of advice I was given (read) as a trainee chef, the one that I took onboard quickly was from my culinary hero, Chef August Escoffier who said " a recipe no matter how well composed or researched is no substitute for imagination, creativity and flair"