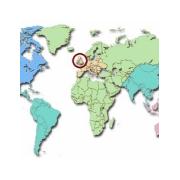 View all
View map on Google.com

Dawlish is a small town and seaside resort on the south coast of Devon, England between the main holiday destination of Torquay and the city of Exeter. Situated back from the seacoast above high, deep-red cliffs, Dawlish covers around 5000 acres of land and has a population of around 13000. The land rising from the coast forms a small valley with a rivulet running through its trough starting its course at Haldon moor, passing through neighbouring villages, through the town centre and out to sea.

The rivulet, more commonly known as 'Dawlish Water' or 'The Brook', plays a central role in the town's geography and character. Although a natural rivulet, it was reconstructed in the early 19th century to reduce the possibility of flooding and to provide some control by the introduction of small weirs. Running though the town, it is bridged at several places to provide pedestrian and vehicle crossing. It is home to many waterfowl, including the famous Black Swan, and to fish such as Trout.


The architecture of the town has a charming appeal with buildings dating back to both Victorian and Georgian periods. Still older buildings from around the 17th century remain near the town and towards the outskirts. At the town centre, running parallel to the Brook, there is an attractive park providing a relaxing environment for families. The park, or 'Lawn' as it is known, is home to exotic plants, chestnut trees and palm trees, offering shelter for visitors and for the wildfowl that live there.


Dawlish became popular as a holiday resort during the last century, particularly Dawlish Warren - a sandy stretch of coastline that extends for 3 miles north towards the estuary of the River Exe - home to some of the most beautiful beaches along the coast. Tourism is still its main industry attracting thousands of visitors during the spring and summer periods.


In the 19th century Dawlish was featured in the novels of Charles Dickens and Jane Austin and became a place of fashion for the aristocracy. Subsequently, it has become a recognised filming location for the British Film Industry and is occasionally featured in Victorian drama.


At the beginning of the 18th century Dawlish was a small fishing village. The coastal seas supplied large quantities of mackerel and herring, along with shellfish, and the population grew from 1000 to 3000. It also became celebrated for its orchards and cider production. In the latter part of the century Dawlish became host to the innovative railway construction devised by Isambard Kingdom Brunel. The railway line connected Newton Abbot to Exeter with much of its railroad along the seacoast. The hard coastal rock made the construction arduous and resulted in several tunnels though the sea cliffs, some of which had not been planned. The journey along the railway is today, however, one of the most scenic in Britain. To find out more about the town's history Click Here.