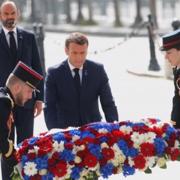 how did the french celebrate V.E. day?

Anyone have a clue?

Probably by waving the Stars & Stripes and praising the yanks for all that they had done for them.

President Macron laid a wreath at the tomb of the unknown soldier in Paris - the ceremony closed to all but a small group of officials. 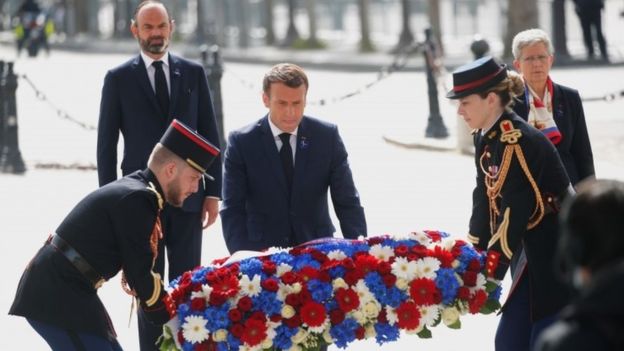 Those few attending kept strictly to social distancing, and a small military choir sang the Marseillaise.

President Macron began the ceremony with a wreath-laying at the statue of Gen Charles de Gaulle, leader of the Free French forces in the war. But just a few officers and aides were there, surrounded by empty streets.

France has been under strict lockdown since mid-March, and on Monday the nation begins an eagerly awaited easing of it, though the amount of easing will vary regionally. Paris and the north-east are the virus hotspots.

good to see they  pulled out all the stops.

Did we do something similar here? Did BoJo lay a wreath at the Cenataph and at the foot of Churchill's statue? Did I miss it?

And anyway, whatever ceremonies/celebrations had been planned by any of the countries involved in VE  - all will have been curtailed because of the present pandemic.

well lynne you certainly told me there.PS who the ------ is charles de gaulle?

Free France and its Free French Forces (French: France Libre and Forces françaises libres) were the government-in-exile led by Charles de Gaulle during the Second World War and its military forces, that continued to fight against the Axis powers as one of the Allies after the fall of France. Set up in London in June 1940, it organised and supported the Resistance in occupied France.

Tut Tut Lynne calm down. I didn't realise your so sensitive.

Q. Why are all the roads in France lined with Trees?

A. So the Germans can march in the shade.

Just posting an answer to the second question you asked.

Your being very disengious, as regards France when your

country is overrun and the Brits are pulling out you have no option but to surrender to end the unwinnable contest.Many french have their lives to fight a rearguard action to try and buy time for the Brits evacuation.

and secondly the British stance over the e.u.

I fail to follow your input, are you saying that countries freed from Nazism were not happy because part of the allies were British.? The e.u did not come into existence till years after the war (even then it was called the common market) so what has that to do with countries being freed from the Nazis.?