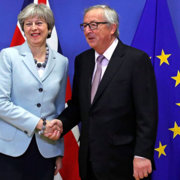 The Great British Sell Out

EU employee of the month 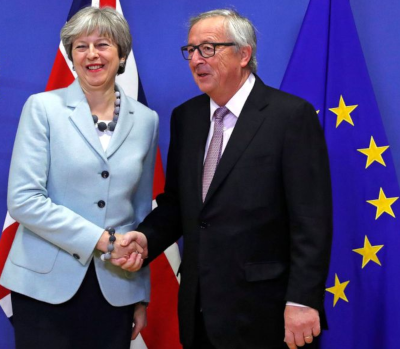 Theresa May says we are leaving but clearly her deal is nothing of the sort. We couldn't really be in a worse mess than if that deal goes through.

Has she lost the plot?

Remember that leaflet ...'we will do what the vote result is' lol. Clearly not.

My Mum used to say, If your friend jumped off a cliff would you?   'Nuff said, Brexit is nothing more than a collective case of self harm by those that suffer cognitive dissonance!!

Some people don't agree with democracy.

Why do people and her cabinet and party keep on giving her more chances to change?

No deal is better than a bad deal! Well old love you and your advisors who as civil servants should not be in the room

You bought us a bad deal. Now follow what little honesty you have left and go. You have done enough.

It seems Teresa May has a plan B which if she loses her deal in Parliament,  is to have after many

statements not to, will propose a second referendum.

If Teresa May   her advisors or Others  try to ignore the referendum result or  call for another vote.

Dare I say it could end up in  total anarchy.

As indeed there could be total anarchy as a result of a No Deal food/medicine/plus lots of other things as well, shortage.

There will always be shortages of something. We had a shortage of Co2, farmers are now facing a shortage of hay/straw and I sometimes have a shortage of money, but it is nothing to do with brexit.

So no tomatoes,daffodils no Viagra, Can't imagine sending out U Boat packs or E boats. Get learning to live without these things

Be a bit difficult for people to live without life saving drugs........

And yes I expect people would, and already do say, we need more police, navy ships etc

But the way they are financed is by way of taxes. And to pay taxes people need to be in jobs. And a No Deal Brexit threatens lots of UK jobs.

And as for cars. Well, all those Mercedes, VWs and Fiats will be no prob for the EU. They can just export them to somewhere else instead. Japan perhaps?

We can go on and on.GET OVER IT.

I thought we were debating Deal or No Deal.

Is it over then? Has it been sorted? Has anyone told T. May?

I heard Boris Johnson on last week's Andrew Marr show say that he would take personal responsibility if people were to lose their jobs because of a No Deal brexit. He didn't define what he meant by that though. I wondered if he meant he would pay the mortgages and bills and suchlike of all those who would lose their jobs in this country as a consequence of a No Deal Brexit.

Or whether such a claim was just another load of b/s from him.

JC not doing too well and Tony Blair is back and ready to take over... or to be leader of EU..

and this from a Labour paper...

Tony Blaire tells lies, and who would want a liar in any power struggle?

Tell me a politician that doesn't tell lies?

As far as I know they all do, but he got a man hanged on his lies. Remember he had weapons of mass destruction--- it was proved he  had none. And he gloried in it.

Lynne
Life Under Saddam Hussein: Past Repression and Atrocities by Saddam Hussein's Regime. For over 20 years, the greatest threat to Iraqis has beenSaddam Hussein's regime -- he has killed, tortured, raped, and terrorized the Iraqi people and his neighbors for over two decades.4 Apr 2003

Life Under Saddam Hussein: Past Repression and Atrocities by ...

What happened to Saddam Hussein's son?

What is Saddam Hussein known for?

Who is Saddam Hussein son?
Feedback

https://abcnews.go.com/WNT/IraqCoverage/story?id=2761722&page=1
30 Dec 2006 - Saddam Hussein was hanged for ordering the deaths of 148 Shiite men and boys in the village of Dujail after an assassination attempt there in ...

https://www.thoughtco.com › ... › The 20th Century › Important People & Events
3 Feb 2018 - Iraqi President Saddam Hussein gained notoriety for murdering thousands of his own people. These are some of his most heinous crimes.

https://www.theguardian.com/world/2003/jul/23/iraq.suzannegoldenberg
23 Jul 2003 - And yet for all that Uday Saddam Hussein symbolised the brutality of the Iraqi regime, his powers were severely circumscribed. Although he ...

Life Under Saddam Hussein: Past Repression and Atrocities by ...

https://2001-2009.state.gov/p/nea/rls/19675.htm
4 Apr 2003 - Life Under Saddam Hussein: Past Repression and Atrocities by Saddam Hussein'sRegime. For over 20 years, the greatest threat to Iraqis has been Saddam Hussein's regime -- he has killed, tortured, raped, and terrorized the Iraqi people and his neighbors for over two decades.

The bloodstained past of Saddam's sons - Telegraph

https://www.telegraph.co.uk/news/.../usa/.../The-bloodstained-past-of-Saddams-sons.html
23 Jul 2003 - The news that Uday and Qusay Hussein were killed inside the spacious ... held direct, personal responsibility for the greater number of crimes, ...

https://www.foxnews.com/story/brainroom-saddam-husseins-atrocities
29 Dec 2006 - A chronicle of the atrocities committed by Saddam Hussein.

www.spiegel.de › Fotostrecken
18 Oct 2005 - In April of this year, investigators found a mass grave in the al-Samawa desert 270 kilometers south of Baghdad. According to pathologists, the ...

https://news.stanford.edu/.../baath-party-archives-reveal-brutality-saddam-husseins-rul...
29 Mar 2018 - When Stanford scholar Lisa Blaydes decided to write a book on Saddam Hussein'sregime in Iraq, she turned to one of most comprehensive ...
1 Agree

Forget all that twadle, he had his thumb firmly on the situation. Look what you have now.

So reports from various sources of mass atrocities at the hands of Saddam is twadle (sic).  Really?

That allegations that he had weapons of mass destruction subsequently turned out to be questionable is a different matter.

(Although of course the two issues are related).

How many people have been killed in the countries that he was in control of or  not in control of in the Middle East? Syria, Afgan, Iraq and the like. America will not release the figures, and that is not twadle.