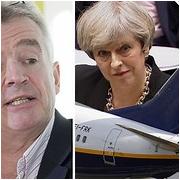 Brexit what is the problem?

When  the French and others stop sucking up to the Germans they may start realising the political Trojan horse that has been created.

Can you explain what you mean please.

Interesting read from 2013 about Germany and the e.u.

Something to keep an eye on by those who like to fly away on holiday to sunnier climes?

That's an awful lot of bleating from Ryanair.  Other airlines don't appear to getting hysterical about what might or could happen.  I have no doubt that a rabbit will be pulled out of the hat and a deal agreed before the Brexit deadline.

I thought reducing air travel and our carbon footprint was meant to be a good thing?  And more staycations will be good for the economy.

Brex City Rollers meets Greenpeace. You couldn't make it up.

What next? Entryism of the Green Party by Kippers?

ps @b.o.liking - see  the second post of this thread. you haven't responded. so i'll ask again. can you explain for me (and possibly others as well) what you meant by your opening statement please.

Hi Lynne i tried to start a debate and my point being was this.When Mr heath took us into the Common Market we were not told how much

the E U would enmesh itself into our Democracy. Nor did anyone have a chance to call  a second referendum on where this was going.

Since we joined the EEC/EU in 1973 various governments have increasingly signed away our sovereignty with a number of new treaties coming into force.  Not once were people given a choice as to whether this ever closer union was actually wanted.

French and Dutch voters made a stand in 2005 when they rejected the proposed EU constitution.  All further referendums on the subject were cancelled to avoid even more humiliation, but in a sleight of hand the EU just changed the name to the Lisbon Treaty and introduced it two years later anyway.

Who can forget gutless Gordon Brown dodging the grand signing ceremony, and instead sneaking in though a back door to do the dirty deed a few hours later.

From the ECSC to the EU - its timeline

So basically according to that time line no one wanted to be in the EU in the first place.

Let's get out asap, rig up trade deals with the rest of the world including the EU on our terms and let the good times roll.

What about those with whom we are hoping to set up these trade deals. Don't you think they might have some terms as well?

It's called negotiation.  We simply haven't been allowed to broker our own trade deals for the last forty years, and now we will be able to.  There's a whole world out there beyond the confines of the EU cartel.

I know it's called negotiation. It usually means give and take on both sides.  Thus the negotiations, let alone the outcome(s), won't be on our terms alone.

Now philip Hammond announces we are not getting a Brexit for a possible 3 later than expected.

He says his cabinet ministers are in agreement.

Since when has he spoken for the people that voted out. I smell Treachery.

I think the cabinet are listening to the voices and concerns of business people and the negative economic impact they (the business people) believe a hard Brexit would have on many in this country.

There was no timetable on the ballot paper as far as I remember.

We leave the EU in March 2019, with or without an agreement.  If no agreement is reached we trade on WTO rules, and Brussels doesn't get its £50/75/100 billion, or whatever other telephone number sum they have thought up depending on what day of the week it is.  Soft Brexit = No Brexit.

It was entirely up to the UK when Article 50 got triggered. Theresa Mayhem went for March 2017.

Twas the UK that started the clock ticking.

As far as listening to business people might be one thing but the people were asked to vote and they did. If Philip Hammond

don't like it or can't hack it then go.

That Lynne is democracy which ever you slice it.

But the cabinet isn't saying we won't leave the EU.

If you disagree with that proposal I suggest you contact No.10. Downing Street.