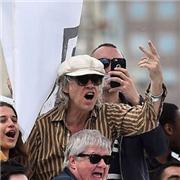 When Brexit is triggered

Are any watering holes going to have a party for those of a certain view point?

Hoping to whip up some Dutch courage, b.o.liking?

By drinking lots of scotch whisky?

And perhaps the party goers should invite some scots bagpipe players?

Put it like this b.o., if the result of the vote across the Channel yesterday does not mark a downward trend in "the wrong sort of populism" in a wider Europe (and in that I include Great Britain), then I'm a Dutchman.

Given that Brexit will, perversely, have had a hand in the effecting of such a trend, then perhaps it would be worth raising a glass.

Your boozer or mine?

Rutte's VDD party lost 25% of its seats, while Wilders increased his to become the second largest party in The Netherlands.  That doesn't seem much of a downward trend to me.  Mijne is een pint van Heineken.

@b.o.liking, should be a bank holiday and street parties nationwide.

I hope you're right Lynne. While no hair shirt can be uncomfortable enough for our most ardent chest-beating Brexiteers, the subtext to the ongoing battle between Scotland's FM and our PM, Lady T, is that our nation's leader will need come up with something better than a hard Brexit, if she does not want Scotland to walk.

Can Theresa May be as bad a gambler - or negotiator - as David Cameron? Let's hope not - otherwise today may well go down in history (as Nichola Sturgeon said earlier) "... as the day the fate of the Union was sealed."

From one of today's national papers.

"If May’s Scottish gamble comes off – which would mean Scots vote to stay in the UK and to accept the Brexit terms, while delivering a possibly mortal wound to the SNP in the process – the Tories will be beside themselves with delight. If it fails, May will have engineered the breakup of the United Kingdom after 300 years, precipitated a new Irish confrontation after 20 years of peace, created a crisis over Trident, and fast-tracked the loss of the UK’s UN security council seat."

Which paper was that then?

"Humpty Dumpty (the UK) sat on a wall

Humpty Dumpty (the UK) had a great fall

Again i ask are there any English pubs having a day to celebrate this glorious day on the 29th ?

@b.o.liking i'm not sure you'd get an answer on this forum, you'll probably be better off asking individual pubs or checking out their facebook pages.  i would imagine the landsdowne would be your best bet.

@b.o. have you tried any pubs called The Sun?

I'm more than happy for the clocks to go back, so to speak, to before January 1st 1973 when we joined the EEC.  We've had to wait decades for the vote to do that.

@b.o. or pubs called The Star?

I can see the typical sneering attitude of the arrogant Remoaners coming through on this thread, and you know what Lynne & Gary?  It's the likes of people such as you that helped Brexit happen.

Some people have got no sense of humour.

Hedging your bets there Burneside?

I do not accept your characterisation or your logic, however I would agree that an out-of-touch Tory party leadership conducted a disastrous Remain campaign (on the back of a dismal pre-referendum EU negotiation display by David Cameron) which emphasised more the negative aspects of leaving, rather than the positive reasons to remain.

The Remain side was not helped either by Barack Obama saying we would "go to the back" of the trade negotiation queue (so much for the special relationship) nor, on the eve of the referendum, Jean Claude Juncker stating 'there will be “no kind of” further renegotiation with Brussels if Britain votes to remain in the EU'. Then there was the business of 'The Bus'... but in truth by then the damage had been done - and the rest is history.

Since the referendum we have hade the rise (and, I hope, the beginning of the fall) of the right in Europe - and the perception of a softening of attitude from Brussels, who perhaps understand the British psyche now a little better. Too late for ongoing membership, granted, but amongst the turmoil a sense perhaps that if all the cards are on the table, then an acceptable deal can come forward.

Until such time, Burneside, enjoy your Heineken while you can still afford it. Cheers.