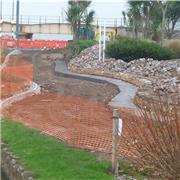 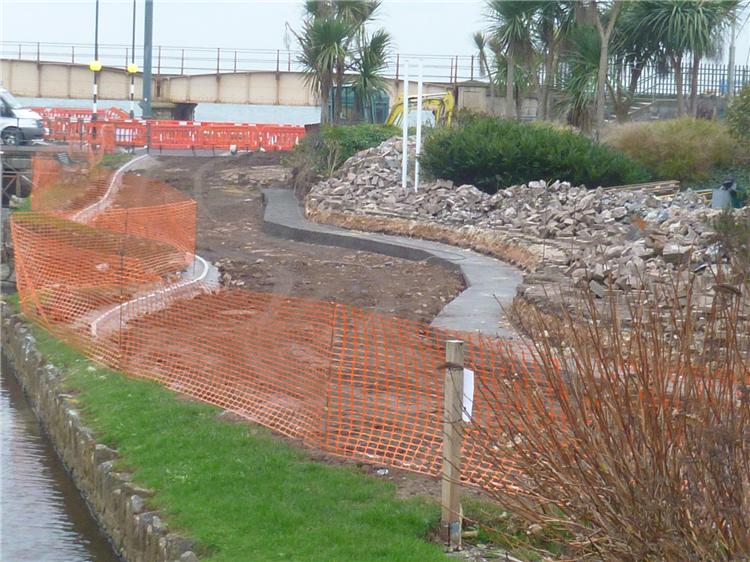 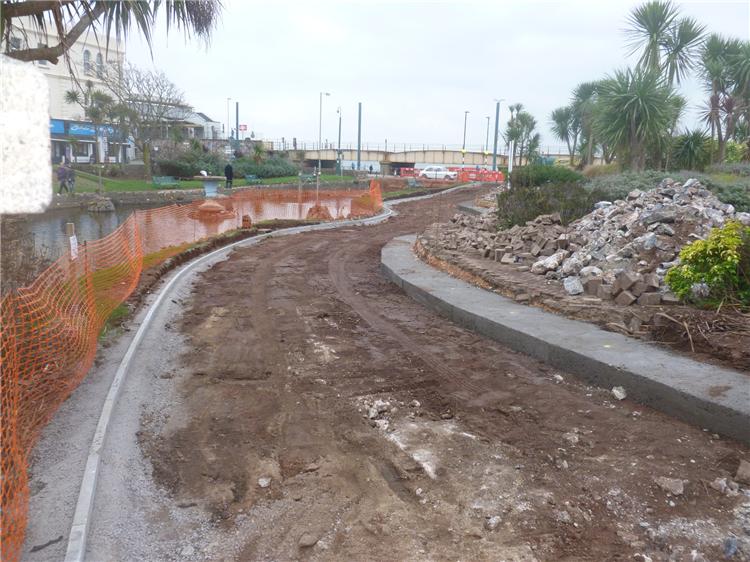 Wonder what will replace the Mini Golf?

Another stupid waste of public money cycle path. When is the madness going to stop. Funny thing is there will be nothing left of the town centre for the massive influx of visitors promised by this huge wasted investment. Herer's a list of latest business closers being talked about -

Bastins, Stokes, The Monkey House, Snooky Trust, Witches Bowl plus one or two clothes shops and maybe others.

Come on Boots, Lloyds bank and the CooP get with the programme and abandon the sinking ship.

What will the Town centre manager and her supporters, the chamber of trade and local council have to say about this resounding failure. Watch this space, but dont hold your breath

There is a notice in the Dawlish Post page 57 bottom left of the page for tenders to lease the space.

Theyll be hoping for a cycle hire shop like the imaginary one they suposedly gave planning consent for at the Warren Toilets. TDC live in some kind of cloud cuckoo land

They are offering tenders for a 5 year lease to refurbish and run the mini golf.

I am so shocked by these photographs, why are our councillors allowing the area to be ripped up like this? Was there any consultation? Who agreed to this madcap scheme? Next thing we know there will be a large slug built on the lawn area, remember that?

Do you think the council should pave this wiberly woobly way with Yellow bricks so it compares with the fantasy world of the Wizard of Oz. Because if they seriously believe that cyclists are the answer to rejuvinating the towns businesses and fortunes then thats the kind of fantasy land they must live in. Would the town manager be the Scarecrow, Lion or Tin man?

Tarmac addicts ,I do enjoy my walks around teighnmouth on there cobble and paved paths

Well unlike motorists cyclists require a perfect surface to cycle on but then for some reason that probably only God knows they return to the pothole ridden roads to play chicken with motor vehicles.

As many will know, Tuck's Plot mini-golf course is Teignbridge District Council owned and run.

Last summer, proposals for a new cycle path crossing Tuck's Plot were shown by DCC to Dawlish Town Council members by way of consultation. At this consultation, suggestions for alternative uses for the somewhat dilapidated site allowing the area to be more attractively landscaped were proposed by members. This suggestion was not taken up by TDC/DCC. Members were advised that the mini-golf was being run at a profit.

Thus to accommodate the new cycle path being built by Devon County Council across Tuck's Plot, the original footpath is to be doubled in width, taking space from the wall and landscaped area adjacent to the mini-golf.

The matter of the use of the site was raised again at the Dawlish Town Council meeting of 11th January during discussions on agenda item 14: To note that the mini-golf course at Tuck's Plot has been closed because it is unsafe and to respond to TDC's plans to develop the area with a new mini/adventure golf course.

The discussions and the Town Council's response to this news from Teignbridge (which included commercial information and news that the matter would be offered privately on a tender process) were adequately covered in the pages of the Dawlish Gazette, and I do not intend to reproduce them here. For those golf fans who may be interested in taking on the tender challenge however, below are the 2016 opening times and charges.

It's hard to see the coherent strategy in this. Much work continues in Lanherne to channelling the track down to the station. I thought I had read that the station was the end of the track, at least until Dawlish to Teignmouth/Teignmouth to Newton route along the river had been resolved. Where does this new track come from/go to? And why?

Not verified, but the workmen have told me it is continuing up Brunswick Place, footpath to be widened The Brook side then through barton car park along The Brook up Oak Hill along John Nash Drive rejoining the A379.  Now if this is correct no cyclist in there right mind will do that, they will just cycle up the hill again if this is correct it just shows how deluded those making these plans are.

Would this be the same footpath where summer visitors spend a lot of time milling around while admiring the various wildfowl on display?

@leatash = they dont have a plan, they just keep applying for grants off sustrans in order to destroy the road network arond dawlish. nobody gets a say about cycle paths they have just become a cash cow for local government. at the end of the day its still public money thats being spent and the public should have a say.

You are correct Fred but something will have to give i was stuck behind cyclists three times today on my way back from Exeter when there is a perfectly good cycle path we need legislation as they have in Holland where cylists have to use cycle paths when available.

What is unsafe about the current mini golf course, that has been there for at least 55 years that I am aware of without being unsafe? I agree it is old hat and needs replacing but to this use the unsafe card?? Please!! Once again TDC are riding roughshod over Dawlish and NO ONE is standing up to them!!

it's the new byepass for baileys. herein known the Teignmouth/Dawlish dual carriageway Toll road.Or could  it be the new inland Bristol to

If my memory serves me right it was upgraded about 12 years ago.  Originally it was a permanent course it was then changed so the component parts could be removed and stored in the Winter and that is how it is at present.

Unsafe mini golf, what a joke. It sounds very much like the lame excuse they used for the victorian shelter, that was demolished, after the Theatre in Teignmouth was rebuilt.

As others have stated above, and I have witnessed myself on many occassions, most cyclist's continue to hold up traffic on the road when there are cycle paths available.

I want Dawlish to be updated, but in a sympathic way to embody its history. I do not want a mini Waltdisney world were all you can hear are kids/parents screamingand cyclist's barging through. Tranquilty -  the wind rustling through the leaves on the tree's and the sound of the brook.

The Victorian's had the right idea and developed The Lawn area to be a place of quiet contemplation. Where people could walk unhindered and enjoy the peace and quiet or sit and do the same.

There's no need for cyclist's to cycle everywhere, there backsides aren't permanently fixed to the saddle. If the idea of the cycle path is to get people to walk around town. Why make a cycle path system runing straight through the town. The cycle path should stop at the edge of town stating cyclist's to dismount and allow them to get back on when they reach the other side of town.

NO, the solution is to mix cyclist's and pedestrians together which is a recipe for disaster, but a quick fix for the council's to get their payment from central government for the additional miles of cycle path laid in their kingdom.

In general. I'm in favour of cycle paths. However, this one looks like a mad waste of money to me. Since just before Christmas I have counted 18 cyclists in my occasional trips from the town to the Warren, some in small groups. Of these,  just two were using the cycle path. Yesterday heading for the town along the A379 a cyclist in full regalia (lycra, helmet, shades), came strainght out in front of me from the Warren Road without looking and, obviously NOT using the cycle path.

Routing the cycle path through and around the back of town, if true, is manifestly daft as it won't be used. If it is, and the cycle path is 'shared' with the footpath through the town, I can't wait to see the bust-ups between pedestrians and cyclists, particularly when it's busy in the summer. On the Exmouth side where the boardwalk is 'shared' I have been shouted at by lycra louts and seen near misses as they use it as a high speed velodrome on a Sunday whilst people stroll with dogs and toddlers.

As for the argument that this will 'regenerate' Dawlish, well, if recent closures are anything to go by, the proof seems to be in the pudding.

On Friday morning I was driving down The Strand, in my car, towards the junction with the A379. I witnessed an adult male riding his cycle off the A379 and ride up the centre of The Strand towards me. The cyclist bumped up the curb and on to the pavement by Boots and only because I was in his way.

It's the same issue for all the anti social behaviour that affects residents of Dawlish. It's not the laws and bylaws, but the total lack of enforcement and those who want to run a muck know it all to well.

So come the Summer pedestrians, children, dogs,etc will have cyclist shooting past them on the same pavement they are walking on. The cycle path, if you have to have one, should be seperate from the pedestrians and there should be a physical barrier between them so cyclists cannot just ride in to those walking on the PAVEMENT!