Thanks for the photos Ziggy. These look far better than the tatty old sheds that were ther a few years back.

Well, those tatty sheds were in place for over 50 years! I bet you looked a bit tatty after 50 years! The difference is those sheds were loved and cherished by everyone.

I wonder if there will be another clairvoyant; perhaps they will tell me.

That is weird! I assume Cassandra your post is in response to my question. - do Pinder Fashions own the ugly retail outlet in DW, but my post has mysteriously disappeared. Perhaps the clairvoyant is already in post and doing his/ her magic!

I was going to ask what the building work was at the warren as i've been looking on the webcam,i know its early days yet but does anybody know when it

And what is it going to be, who owns it and when did it go before planning? Loads of questions to be asked, which I am sure there will be reasonable answers to but ............

It might if the link worked! But thanks for trying.

alternatively, you can go to the Teignbridge planning portal and look at 12/01491

Thank you, I will do as you suggest and hope all the worrying questions are answered  in full.

This post has been hidden due to too many reports.

Please report the post if you also feel it requires moderation.

Thanks Michael. Your original link worked for me.

Margaret, maybe you metropolitan types should learn copy and paste. Instead of expecting everything on a plate...

Mrs C you are soooooooo boring!

Mrs C, the DTC planning meetings are barely quorate at any time they meet and this has been the case for the last three and a half years. I have my own theories as to why that is but I am too professional to air them on this forum. I am a member of planning but I am also a professional  working woman so cannot attend all meetings. FGW do a fantastic job of getting me from Dawlish to London and a whole variety of other places on their network but, sadly, cannot guarantee that my professional working schedule will allow me to attend the planning meeting every three weeks! That really is way beyond their scope!

Please, explain the false pretences. Even I am baffled!

What a cop out! Read your own post at 23.13. And you still have NOT explained the false pretences.

Margaret, why bother agreeing with my thread then continue with your bickering?  Why don't you take it to the Lawn and pull each other's hair out like two hormonal teenagers.  I'm sure you'll pull a bigger crowd and at least they can choose to avoid it, we're forced to read this nonsense.

WEBMASTER - would you consider moderating posts before they are published?   I'm guessing, like me, plenty of users are drifting away as they can't be bothered with it.  Your stats might improve if the windbags are reined in.

I must admit I can't remember seeing anything about this previously being mentioned but as Michael's link is from 2012 perhaps I've just forgotten!  Does Dawlish Warren really need anymore retail units?  How many bucket and spades do we need?  Seriously, I wonder who will take up these units and if they've been rented out already.

on the plans it says Pinder Fashions,  believe they already own the present retail unit

When that part of the Warren was redevloped a few years ago the council said the present grassed area would be turned into a recreational area, whatever happened to that idea?

So according to Margaret Swift, our elected town Councillors can barely scrape an attendance at the planning meetings but she is too professional to air her views.   That's a first so naturally my alarm bells started ringing.  This needed further investigation.

Clearly some people are not taking their responsibilities seriously enough.

Who's forcing you to read this forum?

@Mcjrpc I have been accused of falsely standing for the council and I want to know the basis for that accusation.

@Dorian, four of the nine councillors above are in paid employment so are not always available to attend meetings.

If you can't manage the job don't put yourself forward for it.  Let's have more committed people representing us.

I don't want to get involved in this argument

Just for the record, Cllr Burrowes has found that her paid employment requires her to work on the evenings that the Planning Committee meets.  She therefore resigned from the committee some months ago.

i think it only fair to make that clear.

I didn't say I can't manage the job, I said I could not get to every meeting. About 50% of the town councillors are in paid employment, which I think is good.

Turning up to meetings IS your job, good on Harrie Burrowes for doing the responsible thing.   Then there's the Code of Conduct for Councillors.   How do you think you score on Obligations 1 and 2?

Please note, just for clarity. The plans are for a single retail unit designed to look externally like a row of indivdual units.

I am curious to learn how Pinder Fashions Ltd came to acquire the lease on this piece of land, given that the council had stated that it was earmarked to become a recreation facility.  How was the decision made to give the land over to commercial use?

@Dorian, I think I score highly on points one and two. I certainly do not cave into bullying tactics from you or anyone else. I attend as many meetings as possible and make positive contributions. For the record, when the recently agreed proposals for Dawlish Warren were presented to DTC in 2012 I was NOT a member of the planning committee.

I see the new building is just selling the same overpriced merchandise the one further down does, certainly doesn't add any variety to the retaler who is already there.

Given that both units are owned by the same retailer I'm not at all surprised.  Nice work by TDC to hand over so much of the Warren to one trader.

I thought the land has been leased to them for a long time, TDC just gave approval for the recent development - were they expected to confiscate it?   What merchandise they stock is surely up to them and if no one wants it they will soon change it.   In my opinion the whole area is livelier and looking much better (apart from the portaloos).   Good for them, they're doing something positive.

It doesn't alter the fact that the council originally stated that part of the Warren would be used as a recreational facility for beachgoers, but then I guess it had other ideas.  KA-CHING!

Ka-ching for who?   What recreationsl facilities would you like to see that the coastline and the existing ones don't provide?

So much for Princesshay outlets coming to sell their goods at Dawlish Warren!

A relative of mine who was staying down here was very keen to visit this new shopping area.

He was, however, very disappointed to find that instead of it being different shops (as per the building's

appearance) it was just the one. Then, to add to his disappointment "it was selling the same type of goods as the large shop

further up" (his words not mine).

Still, time will tell if there is sufficient demand or not.

Ka-ching certainly for the council from the lease fees, and most likely for Pinder Fashions too if they can persuade the punters to buy their tat.

I have no strong feelings either way as to what kind of recreational facility should be at the Warren, I am merely pointing out what TDC promised back in the day (a volleyball court, I believe), and what they have delivered (more tat).

Joe Browns (a personal fave of mine).

Not seen any of those in Princesshay!

Those brands are definitely in Princesshay, maybe if you don't buy for teenagers you wouldn't know.  And if they're tat they're expensive tat!

Who cares if it's tat anyway, it's a caravan holiday!  If Pinder Fashions are investing and expanding, Teignbridge are earning rent and rates and the punters are buying more flip flps, that's win win win in my book.

It just goes to show you can't trust TDC to keep its word about anything, whether it be creating a recreation facility, or keeping the toilets open.  And if they are coining it in, surely they should be putting some of that money back into the Warren, not closing things down.

I agree on the trust issue, but then I didn't vote for a Tory council.      I doubt they're 'coining it in' though, more like cutting their cloth accordingly.

None of the brands I listed are tat! And all either have their own stores in Princesshay (I.e Superdry) or are available in stores there...

In fact I've just dug out the carrier bag from "Boardwalk", which lists the brands (these won't all be familiar to most who post here, granted, but they will be to most under-50s): 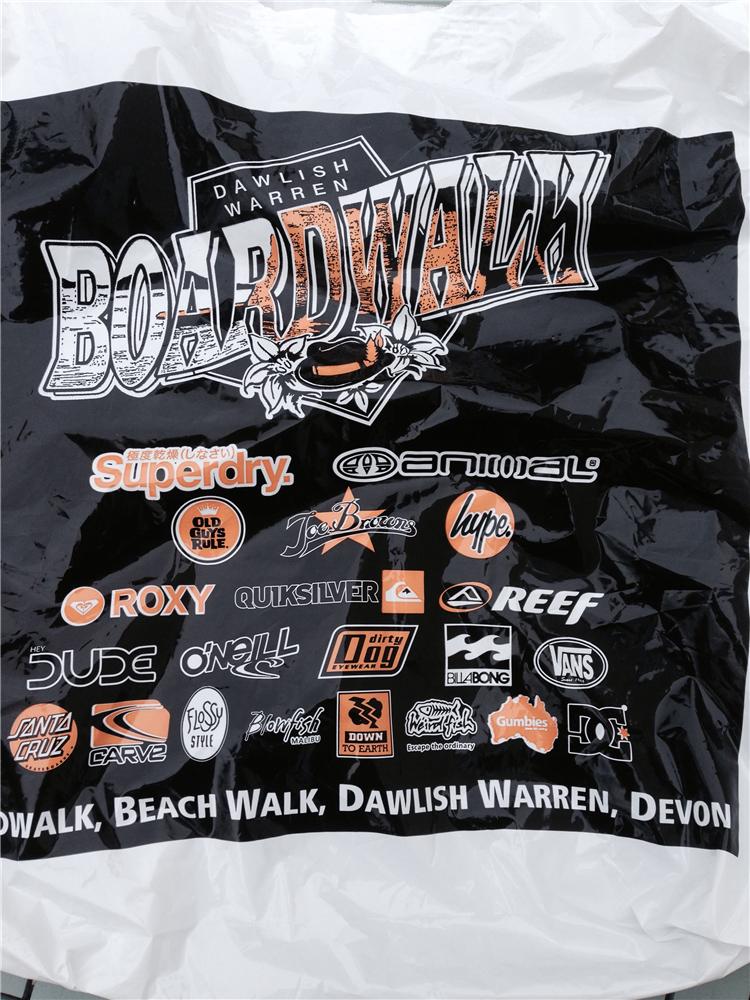 I don't recognise all those brands but the ones I do know are most definitely not downmarket.    You get more overpriced tat in M&S these days.

A number of them are skatewear and surfwear brands. Some are also available at Warren Traders but most aren't.

I'll pop over and look at the tat for myself this weekend and then do a comparative visit to Princesshay! It's a hard life!