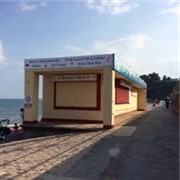 Lynne, I was losing the will to live on the other thread so I've started a new one.  Here's your photo. 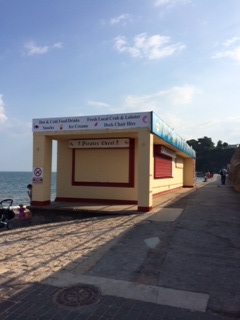 Ah! That seems to have improved in appearance since I saw it last!

Well it has had some work done but in my opinion the only real improvement would be to demolish it and replace with something easier on the eye.

Do they have the right to put out so many chairs and tables?  They seem to be spreading towards the viaduct.

Also, there's seems to be a proliferation of vehicles being parked under the viaduct. Is this allowed?  If so why?

Are there still tables and chairs on the hardstanding to the right towards Boat Cove as thats where they always were, not where they are now?

They're everywhere - to the side, by the viaduct, on the sea wall, with parked prams blocking the way.   Maybe Another46 could call TDC and get them to clear it.

Surely the sea wall and under the viaduct is under the jurisdiction of Network Rail.

With all the rubbish going on and it seems like the people spouting rubbish are at least friends of this place who would actually go there now ?

I own and run the business in the photo shown above. I rent the property and a footprint of land there from Network Rail, my lease has condtions, and my activties have been questioned by the council; however our tables and chairs are all placed on land that we rent from Network Rail.

If it is of great concern to anyone I invite them to meet me at the cafe to arrange for them to see a copy of the lease.

I would also request that our business be left out of your discussions, and this particular photo be removed, as I am not entirely certain as to what relevance it has to anything.

are you having tables and chairs out for Airshow Day?

@Eugmauran good luck with your business hope you do well this summer.

I think you have the right to have this removed if you think it has no relevance.

What's so controversial about this particular thread that it should be removed?

Eugmaran- are you Bob or Barbara or does someone else own the Pirates Chest now?

I think Eugmaran has Another name (46)

@Andysport do not think so . why don't you all give it a rest.

Pete, do you happen to know the Food Hygiene Rating for the New Pirates Chest, as I genuinely can't find it online. Maybe I should direct that at Eugene thinking about it. Anyone in fact, as it is a genuine enquiry.

As i said please give it a rest .

Pete, I am not trying to argue but for one reason or another someone seems to be fighting in the corner of Pirates chest against the Holmans, and also a couple of people on here have mentioned how pirates chest may be doing a few things wrong or just not morally right therefore is it not fair question that people can ask genuine questions, may I ask why your asking for this thread to stop when I cannot recall you asking for the attack against the Holmans to stop ?

Someone asked about tables I gave the correct information and the lessee very clearly and honestly explained their position, I suppose the pirates chest may have been dragged into something, setting up mobile on the Holmans pitch was probably not the best move they have ever made.

May we therefore ask you to explain your reasoning for wanting this thread stopped ?

Because it is boring as simple as that.

Pete, you sound very familiar to Onaport (who became a short-lived Jon), and others before him who suddenly stopped posting and then re-appeared under new names shortly afterwards.

Andysport and others have asked reasonable questions. You only provide unreasonable non-answers. You're nothing but a troll so please leave it be. Thanks.

If thats was you want me to say i will, if it makes you happy . who am i to complain.

You seem to think you are right all the time.

If want to see a troll take a look at yourself.