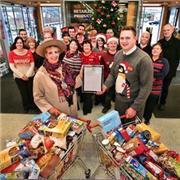 Why are people going hungry in this country?

If you'd like to see a parliamentary debate on why people are going hungry in this country when so much food is wasted each year by households and supermarkets then please join this campaign: http://chn.ge/1avsBiw

Because they have not got any food Simple

No . Why are they going hungry with all the handouts people get it i just do not understand.

NEILH: I've read the link and have been moved to sign the petition. I'm not sure it'll make any difference, but at least we can hope.

In the words of Desmond Tutu: "There comes a point where we need to stop falling for this rubbish.

Judith Chalmers
As Desmond Tutu actually said – "There comes a point where we need to stop just pulling people out of the river. We need to go upstream and find out why they’re falling in."
2 Agrees

13 million people live below the poverty line in the UK.

Every day people in the UK go hungry for reasons ranging from redundancy to receiving an unexpected bill on a low income. Trussell Trust foodbanks provide a minimum of three days emergency food and support to people experiencing crisis in the UK.

In 2012-13 foodbanks fed 346,992 people nationwide. Of those helped, 126,889 were children. Rising costs of food and fuel combined with static income, high unemployment and changes to benefits are causing more and more people to come to foodbanks for help.

The Trussell Trust partners with churches and communities to open new foodbanks nationwide. With almost 400 foodbanks currently launched, our goal is for every town to have one.

And we're not immune in Dawlish - see this from Dawlish Gazette in October:

Sob story i think . if you can not cope should you be on this planet ?

But 13 million people are below the poverty line. Sadly, people in Great Britain are hungry for plenty of reasons that are outside of their control, but are inside the control of the government.

Rubbish. Work harder and longer. Then all will be ok.

Mrs C the law of averages says that there will always be people above and below the poverty line. While it is defined as a percentage of the average wage the numbers below this line increase or decrease not because of any changes in their own circumstances or wealth but simply on the vagaries of the wages across the country as a whole. But it's actual definition you can NEVER lift everyone above the line because as the average wage rises so does the line and so people remain below it.

Genuine poverty and hardship can happen to anyone despite their best efforts. Circumstances can change in a heartbeat and no one is immune from that but there is a difference in how you react to it. Those people who blame life and just feel sorry for themselves deserve a kick up the backside as well as a helping hand to assist them. Those who deserve our respect as well as help to assist them are the people who do ANYTHING to improve their circumstances - any kind of work, grabbing every opportunity. They are prepared to help themselves. Poverty and what you do about it is as much a state of mind as anything else.

I tried to buy some reduced pots in Coop just now, wouldnt let me have them because they were best before 3rd Dec, perfectly good veg going in the bin--- CRAZY

Do you know there are people out there who fall on hard times and need help for whatever period of time, often only short.  A number of these people won't claim benefits which is why they struggle.  You can be as hard working as you like but if you're a small business and people don't pay their bills on time or you're self employed and become seriously ill, circumstances can overtake you.

@roberta, i totally agree, we've had this conversation lots of times at home about the waste. coop of all companies, supposedly ethical, do they really just throw stuff away?!

@flo, i asked the question and they said they are wasted off the system and binned

Apparently there is a Dawlsih food bank being set up through "UCADD".  Perhaps they can lobby supermarkets to recycle food which perhaps is past sell-by date but still normally safe to eat.

Have contacted UCADD.  Waiting to see what they say.

No news yet from UCADD but the petition has succeeded, with over 130,000 signatures so thanks to everyone here who signed up.

The debate will go ahead in a week's time, on the Wednesday 18th of December, so the next week is crucial.  The next request is:

"Please take a moment to contact your local MP to tell them why you signed the petition and ask them to attend the debate to represent you as one of their constituents.

Ask them to visit a foodbank in their area, if they haven't already. Ask them to stand up for the hungry people in their constituency, people in work, out of work, people living on their own, people with children, all struggling to put food on the table in one of the richest and most developed countries in the world."

Here is the site for contacting your MP or other representatives:

Rht Honourable Anne Marie has been invited to attend the debate on the 18th Dec to represent the South West.

But of course the more invites the better?

Customer at Dawlish Sainsburys donated £150 worth of groceries to HITS FoodBank. 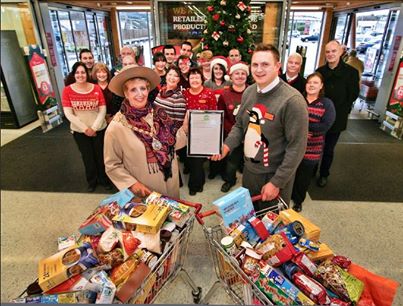 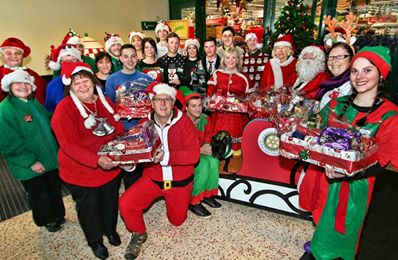 While we enjoy our christmas Turkey a thought will go out for our Local MP the invitation to attend the debate foodbank and hunger in Westminster on the 18th Dec. seems not to have struck a cord,

together with 275 other members against the motion!

Yes it was totally shameful that Anne-Marie Morris chose to vote against the motion.  Also it appears that IDS left the debate and wouldn't respond personally to the charge that it's the conservative's changes to welfare reform that have brought about this obscene situation of almost half-a-million people needing food from foodbanks in this country.  I have also read that the government has turned down EU money specifically designated as aid to establishing foodbanks.

Why don't you write to the heartless Anne-Marie Morris and let her know what you think:

Judging by the letters sent and the lack of response i doubt unfortunately it would make a jot of difference.

she obviously decided that towing the line was more favourable?

To date have not contributed to this discussion on the grounds that Im not sure of the answer to the tittle question.

What I do not think is correct however is that its all the governments fault.

If people lived within their means and didnt burden the social state with all their daily needs pehaps the government wouldnt have to borrow £1.2 billion every year to bail them out

The social benifits are for assistance not existance.

This countries current system is not sustainable and a lot of people will soon have to accept reality, for that im truly sorry but the end of either benifits or the NHS or both  is neigh