I just want to say a BIG Thank You & Well Done to ALL the volunteers who helped make Carnival Week a great fun week despite the weather.

You all worked exceptionally hard in making sure that people had fun.

Also, well done to all those that participated in the Pram Race & Carnival Procession.

Thank you for making my week a happy one.

I look forward to next years fun packed week.

Carnival week was great fun despite the weather. Thanks to all the people who gave their time & energy to make it so. 4 happy children are very grateful.

And wasn't the duck race great.  Three ducks neck and neck at the end with the leader being sucked into a lateral vortex to be overtaken at the finish line.  If anyone from the committe is reading this, could we have some commentary next year.  A peter O'Sullivan style commentary would be fun!

obviously not many of you have spoken to people in the town!!!!

Procession was great too.  Many of the floats were obvioulsy the same as at other local carnivals but since the carnival in Dawlish started later the lit-up floats were more effective in the gloom.  Liked the blacxk swans and the "aliens" (Ashburton I think - excellent reproductions of beetlejuice, edward scissorhands etc.  What was your favourite?

I always found the most successful parades we had in NZ (usually Xmas ones, cos its summertime there) were the ones scheduled after other local ones. As the other towns often entered there floats in other town's parades. As seemed to happen last Friday. Food for thought for the committee?

Have heard the carnival was great! I was not fortunate enough to see any of it this year as I was tied up. Well done to Dave Farley and his crew...brilliant effort! I was very concerned by the following comment by one of the Committee though whic was in response to some criticism about involvement: " The Directors of Dawlish Carnival will still carry on doing what they think is best & will not be holding a public meeting". If this is the case I fail to see how this can continue as a CIC.

I just heard a rumour- and it maybe  no more than that- the fair ground people have fallen out with the Council packed up and left stating they would not be returning.

Can anyone confirm or squash the rumour

Seems as though one week on the lawn during Carnival week was what was expected. Here's an extract from the minutes of the town council meeting held 20th June 2012.

"Mr I Birdsey, a local elector and Vice Chairman of the Dawlish Carnival and Entertainments Community Interest Company addressed members present stating that Dawlish Carnival had used the ‘back lawn’ for the past 3 years with no complaints. He further stated that a funfair

would be in Dawlish for 1 week only in 2012 and that would be during Carnival Week."

@neilh, after readin your post "Three ducks neck and neck at the end with the leader being sucked into a lateral vortex to be overtaken at the finish line. " I reckon you would be a great candidate for the commentator roll!

The gossip on here is getting worse than the EoD the fair was only ever going to be on for carnival week. The limited use of the back lawn was due to un founded interfereance by Dawlish Council and will be dealt with accordingly.

The reason for packing up was taken due to the threat of heavy rain and the ever softening state of the ground. Bearing in mind that the loads can weight upto 30 tons as it was the lawn was left in a pretty good condition.

Its time people in this town shut up moaning about those who try to organise events and bring public entertainment to town or there will be nothing and yet again Teignmouth will gain.  Or is this what the majority want. No shops, nothing to do, just retirement homes and a few tatty benches on a strip of grass. 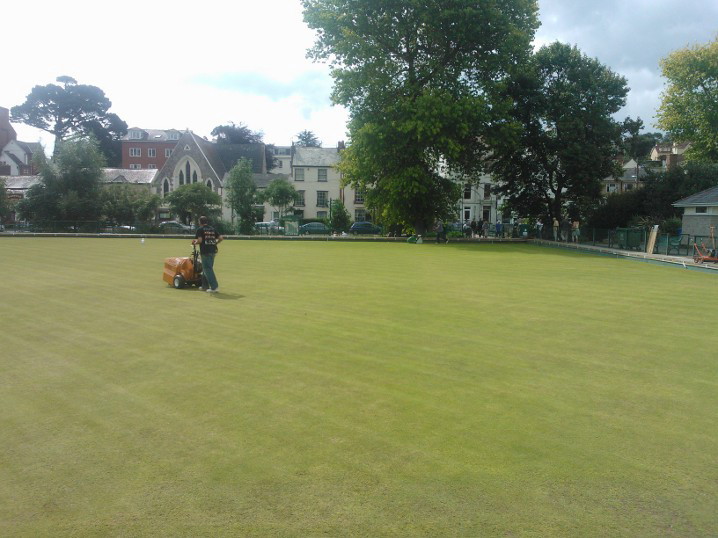 Picture one shows all the excitement to be had on the busiest holiday week of the year when visiting Dawlish Lawn. Picture two shows the entertainment available to all the expectant visitors.

Hope our Town Council are proud of themselves.

What utter tosh.  I take it from your dribble that you wanted the fair on OUR lawn this week as well, in order to rip off locals and tourists for longer?    Yeah right, that really is the future of Dawlish, isn't it?!

the back lawn was always for the marquee and picnic area not for fair, the carnival people have ruined what once was a good week for visitors and town alike.

@Nelson & brazilnut - please back up your issues by stating on here just what either of you have done to provide any form of public entertainment on our lawn for locals or tourists alike. thus giving you the right to be critical of those that do put in the effort

You both by your remarks make it clear that you prefer the lawn as depicted in the photos empty and devoid of any form a activity - That really is good for Dawlish. I wont make comparisons with Teignmouth but weather permitting you should visit the Den tomorrow and note the differences for yourselves

Me?  Public entertainment?  Granted that some on here might say that I'm a clown, but that's as far as it goes.

I would hardly describe a few chavs operating the waltzers as "activity".  Though as usual with these types, they were clearly hoping to entice a few under-16 girls into partaking in their own, shall we say, "activities".  Maybe they'll have better luck with the schoolgirls in Teignmouth?

I was on the Lawn for the pram race parade, and I've since noted that there've been complaints that the girl doing the PA couldn't be heard.  The way the complaints were portrayed was that it was the fault of the girl, however I can assure you it was down to you bloody idiots giving it the large one with the noise from the waltzers.

Here's a catch line for you:

User 4549, I know someone who was arrested for carrying a broken egg shell

@User 4549 - no, that's not what the paper says.  No-one got disqualified ("banned") because of the foot-cutting incident - the story in the paper was merely illustrating why egg throwing is rightly banned (a sentence i can't believe i've just written).

I have to say though that the highlight of this weeks Gazette is the "Wind blows tree branch down" headline. Really.

@FredBassett, dawlish town council listened to the complaints from the townspeople last year regarding the fair being too large carnival week and acted accordingly this year in limiting it. the bouncy castle should not have been behind the bandstand as that was designated a family picnic area. all most people want is a return to basics carnival week, stalls that require participation, marquee hosting the flower show and other indoor events, what we had a few years ago without dave rowlands taking over was fine. it is the people of dawlishs carnival not the ltd companys and rowlands fair, start listening before its too late, to be successful you need dawlish people and visitors, take note of how well jubilee week was organised, never heard no moaning there!!!!

There are good points for both sides of the arguement, but at the end of the day, that certain week is called Carnival Week, NOT Fair Week, or Rowlands Funfair Week, but Carnival Week, which is all about Dawlish and it's hard working residents.

There are plenty of other weeks in the year that Mr Rowland can put his funfair on the lawn, so lets just keep Carnival Week for what it is really for, and as it used to be.

I did read it and that's why I said that there are good points for BOTH sides of the arguement.

Yes, I KNOW what you are saying.

I wasnt saying anything against you.

Sorry if I offended you.

Here are a couple of facts you both need to be aware of regarding your posts on this forum topic. These are FACTS.

a) Nobody complained to the council through the official channel i.e. in writting, therfore the council acted illegally in deceiving the People of Dawlish.

b) References made under the tittle of Chav relating to the soliciting of under age girls is libelous and action could be taken.

The people of Dawlish want THEIR Carnival back -------FACT

@FredBassett i'd respectfully suggest that if you ever decide on a change of career, that you keep well, well away from law.

Ok both of you Brazilnut will be taking over from the outgoing chairmans job on the carnival committee knowing what the people of Dawlish want and being an expert in organising such events. Nelson will be organising free events on the lawn to keep locals and holiday makers entertained and will also be advising on the best use of the legal system as I seem to have something to fear from the law. God only knows what.

Cant wait for next summer to see what you both have to offer or is that what one and the same have to offer, funny how you both seem to leave comments on here at the same time within a minute or two. LOL

To be fair, it's an easy mistake to make.  Seeing as Brazilnut and I were separated at birth.

@FredBassett. Read my post again - I referred to "law", not "the law". Attention to detail eh?

@Nelson. always thought you was a bit of a dick. but you make more sense the more i read your posts.

You take excellent photos Fred maybe you should do it proffesionally, or maybe you do already.....

tut tut @Brazilnut lol. As it happens, the cartoon character's two photos were taken on a smartphone and uploaded to skydrive, rather than on a 'proper' camera.

Suggest you look at other posts and compare to Mugonhead/Fronteraman

@ Phillip.  A bit late I know but here's the climax of the duck race.  Steward and duck-catcher looking on dutifully as ducks jostle for position at the line!