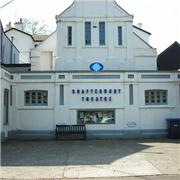 The Shaftesbury Theatre has been owned and run by Dawlish Repertory Company, an amateur society, since 1959. The Company was formed following the attendance of a group of enthusiasts at an evening class. Plays were first staged at the local secondary school and later at "The Hut" which was situated on what is now the Bartin Hill car park. When this building was demolished the Company took the brave step of purchasing the Shaftesbury Hall and turning it into a theatre. Since that time members have worked tirelessly to improve facilities at the threatre both for our patrons and members.