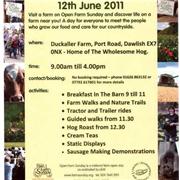 pirate ship is sailing its way from America to a Dawlish play park to replace £26,000 of equipment destroyed in an arson attack.

The new ship marks the beginning of what residents hope will be a total revamp of the Millennium Play Area in the grounds of Manor Park.Teignbridge Council has agreed to pay for the pirate ship and residents have formed an action group to raise funds for more equipment, which can also be used by disabled and visually-impaired children.

Chris Smith, chairman of the action group, said: "The Manor is a prime facility, well used by young and old alike.

"It's been sad to see the play area in such a poor state over the winter months.

"We want it to be a premiere play area like the Den at Teignmouth or Decoy Park in Newton Abbot.

"But we also want it to be an outstanding play area in the South West for disabled and visually-impaired children, which we don't have at the moment."

Mr Smith has been lobbying Teignbridge Council to help replace the fire-damaged equipment since the arson attack last June.

It prompted nearly 50 separate calls to Devon and Somerset Fire and Rescue Service when a huge pall of smoke from the blaze, which is thought to have come from plastic parts, could be seen for several miles.

At the time, Wally Protheroe, the town's deputy mayor, described the blaze as 'heartbreaking' and he was doubtful whether enough money could be raised to replace all of the equipment which cost nearly £100,000.

But the action group is determined to revive the play park and has already sent out a questionnaire to Dawlish schools to find out what kind of equipment they would like.

The group members hope work will start on the pirate ship, which has disabled access, mirrored surfaces and other interactive play functions, as soon as it arrives and weather permitting.

The group also wants to replace the wooden fencing with steel fencing at a cost of around £20,000.

Dawlish mayor Rosalind Prowse said: "It will take a lot of hard work and money to get this done, but I am delighted.

"Any initiative which improves any facility for youngsters, especially those who are disabled, is first class. Teignbridge is returning the play park to its original state."

Cllr Anne Fry, Teignbridge spokeswoman for community services, said: "It's always disheartening and frustrating when vandals choose to spoil local facilities for others.

"In this case we are very happy we have managed to find the money required to reinstate the damaged equipment and help make Manor Gardens play area that much nicer for local people."

Mr Smith is organising a charity auction at The Smugglers Inn, Holcombe, and is looking for donations from local companies.

The group is also looking for volunteers to join the group and help with fund-raising.