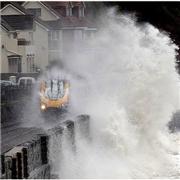 The main railway line at Dawlish is still vulnerable to storms, in spite of £35 million of repairs, the Western Morning News has learned.

A Cross Country train was halted on Monday after it was hit by a wave at Dawlish, bringing delays of more than 35 minutes to morning commuters. And Network Rail admits that it cannot do anything to prevent similar incidents.

A four-mile stretch of track at Dawlish was severely damaged by storms in February this year. Part of the line was left hanging in the air after the sea wall was demolished. The damage caused months of disruption to rail services west of Exeter.

On Monday the 6.34am train from Bristol towards Plymouth was swamped by a wave at Dawlish. Cross Country said its relatively new Voyager trains were vulnerable to seawater because air intakes in the roof allow water to get into the electrics.

Spokesman Richard Gibson said the driver continued on to Newton Abbot where he rebooted the train’s computerised system. But a few miles further, outside Dainton, the train stopped again, and was unable to get going again for 30 to 35 minutes.

Mr Gibson said this was a problem peculiar to Cross Country’s Voyager trains.

The company has an long-standing arrangement with Network Rail and the Met Office, and does not operate along that stretch of line when high waves are predicted. But he said that on Monday there was no forecast of high waves.

A Network Rail spokeswoman said: “Our control room can confirm that the train was struck by a wave on Monday at Dawlish. This happens from time to time and is nothing unusual given the location of the railway line and its proximity to the sea wall.

“Normally it isn’t a problem and trains can carry on as normal, as other than Cross Country, other train services are equipped to deal with salt water. However Cross Country trains aren’t.

“We have a long-standing agreement with Cross Country that if bad weather is expected we will notify them and they will not run services on the line. We didn’t have any notification of bad weather and therefore it appears that this was a rogue wave.”

She said Network Rail was doing “resilience” work in the Dawlish area, but added: “This isn’t really a resilience issue.

“Our work is to prevent what happened at the beginning of the year happening again, however we cannot help the fact that waves will hit trains – this will always happen due to the proximity of the line to the sea wall.”

Councillor Andrew Leadbetter, chairman of the Peninsula Rail Task Force, said: “ This is not entirely unexpected, and we are likely to see similar incidents in the future. It goes to show that as an absolute minimum the Dawlish line must be reinforced to withstand winter weather.

“The Peninsula Rail Task Force partnership is holding the Government to its pledge to ensure the line is resilient, as well as looking at additional routes.

As it says in the article, this is a problem unique to Voyager trains

friends who work on the railway tell me that these particular trains are poorly designed with vulnerable electrical circuits that are too exposed.  I'm told they break down when suffering bird strikes in the vulnerable area, whereas the older trains plow on regardless

seems it would be cheaper to buy better trains than rebuild the rail network.

The strengthening of the seawall at Dawlish won't stop a couple of minor delays caused by big waves, in the same way that an alternative route away from the coast won't stop delays caused by leaves on the line, snow, flooding or the hundreds of other things that cause disruption.

What's stopping them from retrofitting devices to stop water ingress. What century are we in!

National Rail clearly need to get on with an inland line. The sea will always be all powerful.

wondering have you not read previous comments

Yeah were waiting for Government to decide...theyve probably forgot Dawlish by now.

When the Voyager trains first started on this line, a few years ago now, it became clear very quickly that there was a problem when hit by waves. Virgin trains, who used the fleet at the time, made alterations and this seemed to resolve the issue as there have been very few incidents in recent years. It sounds like whatever was done to resolve the problem is no longer effective and more work is required. New rolling stock any time soon is a non starter for CrossCountry trains so they really need to get the problem sorted.

er.........when these franchises were awarded did those putting in their tenders to run trains down here not know about the waves sometimes going over the trains issue and what effect that can have on certain types of trains?

I think your question Lynne exemplifies the whole nonsense of the privatised mess John Major bequeathed us, and successive governments have failed to resolve.

To split the management of one of our major transport systems between Network Rail and a whole patchwork of franchises across this tiny island is a recipe for muddle and inertia.

Margaret is right, new rolling stock ( so often promised, so often delayed ) is not likely any time soon.  Which makes my point, how less likely is investment in an entire new railway line?  The Western Morning News is running a Plymouthcentric campaign to demonise our existing line, and using any incident to promote their cause

The frustration is that the achievements of the Orange Army prove we are still a nation of engineers and with a better model for delivery, our railway system could be the envy of the world.

Absolutely agree Lynne. It gets even sillier though when you realise that Virgin Trains were already running trains down here and then commissioned the Virgin Voyagers for a number of routes including our line but didn't take into consideration the weather element when designing the rolling stock. It then cost them millions of pounds to do the modifications, which now appear to be failing! You really could not make this up.

@michaelclayson. I totally agree with what you say. Plymouth was getting all its public transport while between Exeter st. thomas and Newton abbot were not. The Plymouth mob as I call them are determined to see a additional/alternative route avoid Dawlish and I cannot understand why they want this. The Voyagers even had trouble in rain but HST (FGW operate them), just go straight through the spray/waves. Incidentally the up line can operate both ways.

1.  Don't know why the WMN is sounding so surprised.  Don't their reporters keep up with the plot? Or perhaps they are looking for a sensational sounding headline.  Point is, as I think we all know already, the £35m is just the bear minimum to try to stop another catestrophic collapse again this winter.  It in no way provides resilience in the true sense of the word either this winter or more importantly in the long term.

2.  The simple fact is that all the 'money no object' political pledges of last spring weren't worth a candle because the g'ovt has been allowed to vasilate on making a proper spending decision until just after the next election.  It then becomes very hard to hold anyone to account to sign off on any of the game changing options that N.Rail so valiently presented this summer.

3.  Are unpredicted 'freak waves' so unusual for Dawlish?  Would hate to think that we now have a stronger wall but that waves break in a more adverse way !!

4.  As was mentioned at the ICE lecture about the wall last summer,  these vulnerable Voyagers provide a very useful record of just how often the waves do hit trains :)   It does seem odd that robust modifications cannot be made.  Anyone remember a couple of winters ago when Eurostar had a series of train failures due to the 'wrong type of snow' getting into the electrics?  The air intake was modified to stop repeat events.

5.  Our line/your line !!  West Country - United you stand, divided you fall - and that is exactly what the g'ovt is banking on to allow it to vasilate about proper capital expenditure.

@Clive. I completely agree with you. The seawall still needs work done to it, and a additional/ alternitive railway is not the answer.

Except one needs to bear in mind that Plymouth is the single biggest destination (hence paying most towards the upkeep of the wall) and does not have anything remotely resembling a respectable mainline standard railway to it from Exeter.

My vote is that to be fit for purpose every mainline in this country should be heading towards a future of being equiped with 25kV and Pendolinos.

And if that means the seawall becomes a feeder line then sorry, but so be it.  The brutal fact is that that is all it is currently designed to be.

Of course one option is to 'push' the sea defences much further out to sea - then you can sort of have both.

What plan is in place if the line is forced to close again this winter?

'On the Buses' with Reg Varney?