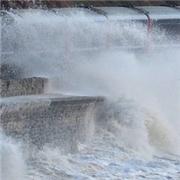 A coastal erosion expert has warned that the new year storms could see more cliffs collapsing later this year.

Storms have already caused a number of collapses around the coast, including at Porthcothan Bay in Cornwall where a landmark rock arch fell into the sea. 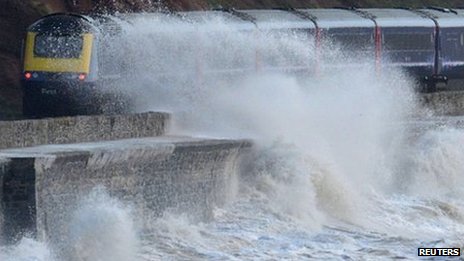 Powerful waves hit the sea defences at Dawlish in Devon

As I understand the situation, this has been ruled out because it is far cheaper to defend the existing line.  So the answer would seem to be that they have considered it and decided not to.

Defending the line seems to be working well, the number of services lost on the Dawlish line is far fewer than 20 years ago.

if you want to see the future of Dawlish without the railway, look at Bideford and Ilfracombe.  And one thing we can be sure of is that the Paignton line would close immediately if the services to Plymouth are routed away from the coast.  Dawlish would lose her rail lifeline.

I said 'alternative' route, like now you can go either Salisbury or Westbury way to London.

Someone on the railway told me nothing will be done unless something major happens...as you say 'could see more cliffs collapsing this year'

The Torquay and Paignton line would not close as is far too populated regardless.

Supposing, just supposing, an alternative route was built inland. I wonder just how long it would remain an 'alternative'. After all, why spend goodness knows how many thousands or millions of pounds on keeping open the coastal route when there would be an 'alternative' not needing mega amounts of money spent on it in order to keep it open.

I am no expert but if an alternative route was available, (I believe there used to be a permanent way between EXETER and NEWTON ABBOT via Bovey and Heathfield), then that would certainly affect Dawlish and Teignmouth in a big way. Not only would it affect peoples choices in travelling into Exeter and beyond, especially for work, but would affect the holiday trade too.

Another reason for keeping the coastal route is that Dawlish and parts of Teignmouth are partially protected by the sea wall which is the responsibility of the railway contactors. If this responsibility was handed over the the council(s), I wonder how much maintenance work would be carried out?

As climate change goes on it will be more and more important to keep the sea wall in good condition. It suffers a lot of damage from the sea and is not that easy to repair due to tidal and climate conditions.

We had the opportunity to do this some years ago when the sea defences were reinforced at the Warren and it is a shame that no one thought about doing it then.