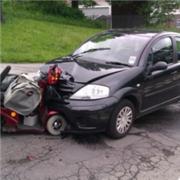 serious' injuries after being hit by elderly driver

An elderly woman has been taken to hospital with “serious injuries” after a being hit by an out-of-control car outside her home.

Emergency services were called to the cul-de-sac at Gatehouse Close in Dawlish just before 12noon today. The air ambulance was called for and the victim, who is in her mid-70s, was conscious and breathing on a stretcher but initial indications were that her injuries could be life threatening.

The male driver, who is in his mid-80s, suffered minor injuries.

Police said they could not confirm whether the driver and victim were related.

I hope the woman is ok but the driver in his mid 80's, should NOT be allowed to drive at that age.

It was a freak accident! They are real people!  He's probably been driving for longer than you've been alive! It could of happened to anyone! Show some respect!

It was a freak accident! i  do not think so. 80 yrs old & still driving !!!!!!! what about the lady he ran over think it was his wife but it could have been a small child & that child would have been killed .

Please dont be disrespecful to older people they do have feelings.  I am sure the gentleman will be devestated about what has happened, but none of us know exactly what happen so we cant make a judgement until we know the full facts.

If you mean disrespectful i am not . This goes on all the time with older people . we need to test them more to see if they are ok to drive . If i was not safe i would give up my car.

jools88 if you look at the stats you will find its the younger drivers who cause most accidents maybe we should retest them.   The stats also show older drivers get less speeding fines less parking fines insurance premiums are lower because they are less likely to have accidents the stats speak for themselves

jools88 you ARE being disrespectful by simply blaming the age of this driver for the accident.  As Lindapetherick said, none of us know the facts and yet there is an eagerness to jump to conclusions on this.  My father is over 80 years of age and drives very well, I certainly feel safer being driven by him than I do by the younger members of our family.  Yes some accidents are caused by older people, but accidents are also caused by people of every age too.  As leatash says the statistics don't back up your comments.

I recently carried out a survey for a motoring organisation on how drivers approached and turned right at a junction i had to note age if they indicated, positioning, mobile use, and speed.   I conducted the survey at the Exeter road High Street junction and sampled 262 vehicles 7 where on mobiles 58 no indication 162 turned right onto the wrong side of the road.  I also found that  out of these vehicles committing offences only 2 where elderly drivers the split in ages was drivers over 60 49% and younger 51%.  The ages of course where a gestimate by myself so the figures on age may be slightly out  but in general older drivers approached the junction correctly and turned right correctly.

The stats also show older drivers get less speeding fines YES because they drive at 25mph all the time and less accidents because there is less of them thank GOD. 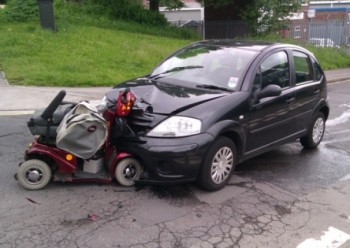