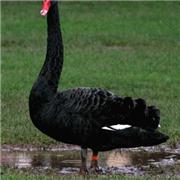 Tests revealed a high presence of bacteria in water flowing from a waterfowl compound in Dawlish into the sea.

A single member of the public complained that the town council did not have a proper disposal system to deal with water flowing from the pond in the waterfowl enclosure. But the resort could also now be deprived of its 14 black swans, which are kept on a brook adjacent to the pond, after the Environment Agency told the council the water must be treated to a specified standard before returning it to the brook, or the pond must be connected to a foul drain at a cost of about £30,000.

A third option is to have a cesspit which the water runs into and can be tankered for safe disposal. Councillors fear that if the costs could not be met, the town could lose 50 ornamental waterfowl kept in the enclosure. If that happened, there would be a threat to the black swans because it would be uneconomic for someone to look after them, according to John Winchester, the town clerk.