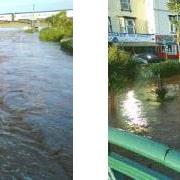 The recent deluge of weather has caused The Brook to burst it banks whilst flood-hit communities in other towns braced themselves for a possible second bout of flash-flooding after more severe weather forecasts.

A clean-up operation was under way in Somerset and Devon following the previous night's torrential downpour. Firefighters evacuated homes in the worst-hit areas and hundreds of people woke up to flood-damaged homes.

Heavy showers were predicted once again, but forecasters did not expect a repeat of todays events.