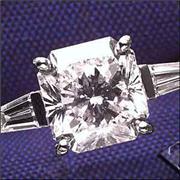 An elderly Dawlish antiques dealer who acted as "a fence" for stolen jewellery was caught on a covert video selling items to an undercover policeman.Kenneth Paterson, 70, was twice recorded selling jewellery to an undercover officer known only as John, said Malcolm Galloway, prosecuting at Exeter Crown Court.

Police caught Galloway as part of Operation Moonstone which had centred on the activities of another fence, Linda Nichols, who ran Upstairs Downstairs in St Marychurch, Torquay, said Mr Galloway.

The crown claims the jewellery seized from Paterson had been stolen in five burglaries of properties in Devon and he knew the items were stolen.

Paterson of Langstone Close, Dawlish has pleaded not guilty to five charges of possessing criminal property in July 2005. The trial continues.