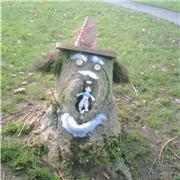 Boyzone are reuniting and will be hosting a massive outdoor concert at Powderham Castle on 25th July 2008. Ronan Keating, Stephen Gately, Shane Lynch, Mikey Graham and Keith Duffy together again. Boyzone are going to be the first concert to be held at Powderham this year. Other concerts will be announced within the next few weeks and will all be open-air picnic style concerts.

We need your vote! Support Dawlish Young Skaters by watching Westcountry ITV on Monday at 6.00pm.